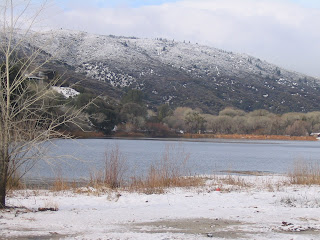 Hi everyone! It was only this weekend that we got internet in the Duck Pond Campground. And Absurdist Lover didn't have to work for his father this weekend so we decided to stay in and enjoy -- yes, you guessed it -- the snow. I lived in Urban Home City for twenty-three years and saw snow fall from the sky like twice. But we're out far enough that I guess it does snow. Crazy.

I've been back on the way outskirts of Urban Home City and away from Adventure U and living in an RV on Duck Pond for three weeks now (including that sojourn to Dreadful Conference for which I was still sufficiently jetlagged and whiplash-culture-clash-wearied to be boring at both the blogger meetup and my interview). I'm starting to get my shit together or at least I've come up for air long enough to realize that there is so much to do. I really don't want to do any of it, but it must be done. Because we're pretty much already at the point where we're running out of money. We needed a lot of start-up things, like pans and flatware and stuff. We may have twenty-four feet long of living space, but we use every bit of it. I've been cooking -- mostly breakfast. We now have a waffle iron (that my parents had promised me for about two years now, but finally CostCo had the exact kind again right before Christmas so I got it for Christmas) and have investigated Trader Joe's amazing Swedish pancakes and pretty much all things Trader Joe's as I had promised myself for the last five and a half years. (Absurdist Lover is also all about Trader Joe's, since its ready-made stuff totally subsidized his recent bachelorhood and is a big hit with both him and his dad.)

There are all these things going on right now. Probably the most significant is that at Adventure U I discovered a lump and had my first mammogram (a mammogram is basically about your breast being smooshed like a hamburger patty between cold plates) -- now I have to find "a breast surgeon" to read the film and ultrasound reports and recommend a course of action. Of course, normal people get referred to a doctor before their date with radiology. So I'm trying to find a breast center or whatever -- and the whole thing is very scary, of course. I also found out that my grandmother has breast cancer. (Okay, maybe I'm a totally terrible person to feel that my teeny-weeny lump is even worry-able compared to my grandmother being diagnosed with cancer, but I'm also trying to live in a camper, negotiate a brand-new relationship and living situation, and figure out my life. Basically I figure I must be in complete denial about my grandmother because I have really no big reaction to it at all. Just questions about treatment and decisions. I think I'm full up -- already totally overwhelmed. At the end of A.S. Byatt's Still Life, there is this discussion about people who seem strong as people who process things slowly. So in the moment, they seem like they are really holding themselves together -- being the strong ones. But they really just process things slowly and so take a really long time to really take in and experience something fully. Which means that it takes practically forever to get over something. This is actually much worse than those people who experience things fully and go to pieces and then reconstruct. I think I used to fall apart -- had the energy to put myself back together. But since my dad's mother died at the beginning of 2006, launching these two years of death and strangeness, I think I've become a slow processor. At some point, I'll blog about the two years of death, but not right now.) Also, there is the project of Figuring Out How Mr. Tabby Is Health-Wise. He has been to a veterinarian, and his re-evaluation of his medication is in progress. In order to keep up our high-eating camping lifestyle, I must very soon find work, either adjuncting or doing something else (but what?). I know I should be working more on writing and really want to write about some recent adventures, but am having a really hard time figuring out how to frame this stuff -- figuring out what I want to say exactly and who I want to say it to. (I plan to blog more on this rhetorical/craft problem.) And there is, of course, the novel, which is not progressing at an ideal rate, but still has a quite respectable 8,400 words. I'm editing a dissertation (in slow motion). I have an article due at the end of the month that I haven't officially begun yet (a revision for a slightly different audience of my dissertation and writing sample). I'm getting a car for which I have to get money for insurance. I'm borrowing money. I'm exhausted.

So with all this other stuff, I'm not getting very far in the plan to figure out my life. I read Maude's recent post about getting organized and know that I should also be spending this time wisely and getting publications out and stuff, but I can't even figure out where I'm going to be this time in the fall, much less figure out whether I'm going on the market again or what. Who knows. There are a number of community college positions opening up in not-too-far-away-from-here locations. Do I apply? Will Absurdist Lover and I figure out how to build a life together? Here? In a different part of the state? In a different state? Thinking about academic jobs immediately brings up all those questions. We don't have answers. The questions all aswirl make me want to have a glass of wine and go to bed.

So that's the update. Today we're getting the car -- which has been a whole tangle with my brother since it's originally his car though he is getting rid of it because he got my dad's old much-better car. But somehow that means that my brother who is eleven years younger than I am wants me to keep a fork in the glovebox as a memento of some stoned rice-sharing night. (I could almost do this as a gift of eccentricity from one to another, but he is way too much of a pain in the ass. He admits that he is a "button-pusher." But it doesn't compute to him that this is not "cute" or "funny." Nor does it compute to him that when you're basically a pain to be around, people don't want to do things for you. Generosity just runs dry.) The fact that my brother and his antics are irking me so much means I'm way too involved with my family already. I've seen them maybe three times, but it's already way too much. I need a life. A whole life. I need to work. Or something.

These update posts are so rarely coherent. In short: there's a lot of stuff to blog about (writing issues, mountain towns, sprawly nostalgia near Urban Home City, life questions, health scares, family challenges, and on and on), and I don't know where to begin! Help!
Posted by Earnest English at 4:08 PM

I'm so sorry to hear about the lump and the breast cancer scare and your grandmother's cancer -- lots of scary stuff going on all at once. Blessings to you in this time of transitions and questions.

Ok, take care of everybody over there... you've got a lot of adjusting to craziness going on!

it is possible that this lump is a result of stress. i hope that's all it is. both my mom's sister and my grandmother's sister had breast cancer--both survived. whatever it is, whatever you need, you let me know.

on a happier note, i'm so glad that you're back! sorry for nagging you in the comments on your previous post, but i get worried and anxious when you're not around. :-)

look, i have been masking my anxiety over all the stuff that needs to get done this year by overeating. it's completely compulsive. i can't stop.

i'm thinking of you!!

Welcome back and good luck with all this. It sounds messy but I think messy is sometimes the best.