Belly Photo, Finally, and a Rundown of the Week 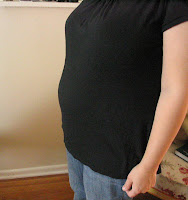 This photo is actually from a couple weeks ago now, when Similarly Neurotic Fabulous Friend (who really needs a better pseudonym) asked for pictures. Please ignore my giant fat arms.

Much is going on here -- both good and bad. Here's the good: my fabulous grandmother (the same one who has breast cancer and had a lumpectomy and lymph node removal in the last few months) fronted me the money for the birth center. So we're a little less freaked out over here at Chez Absurd about money. Of course, next week things may be very different -- but I'm totally pleased that we're going to be able to go to our midwife and birth center with no problems, especially since we've just started our birth class there (which seems to be more information and education than sitting around doing deep breathing exercises and singing kumbayah, which I'm sure would be good too -- my apologies to Bradley and Lamaze classes for characterizing them that way -- I could do with someone telling AL to massage my back even more). Other good: Absurdist Lover's job is officially set to launch on Monday. That is, the call center will be working and he's all scheduled on their list and hopefully they'll call him a lot and send him to fix computers a lot! Not only will this really help with money (assuming he gets a good amount of work), but equally important, he will feel more productive and happy with himself. He's not the type who sort of falls apart and gets depressed and hopeless when not employed, but working will really make him feel better and stronger. More good: Grandpa is getting better, though he is quite tired. Even more good, though strange: a state university has called me about coming in to interview for adjunct work. I don't know exactly where the u is and cannot make the interview times they mentioned on the message, so I'm not exactly thrilled yet, but it's nice to know my CV is still academically viable -- I'm so swiss-cheese brained that I feel like I'll never get hired again.

The big bad is that a professor I know was, I believe, found dead in Grad City early this week. The details are really unclear to me but it appears now that he killed himself. Or at least that's what the police have determined, which I think means that there was no note. He was a good man who cared a lot about grad student issues, and I had a good working relationship with him. I'll miss him, though of course it feels only vaguely real considering that Grad City is so far away. Every day I've looked for info and obits, but similar to last year when a friend of mine killed herself, the newspapers there are not very forthcoming in cases of suicide. (Can I just stop here to focus on me and say that I really don't like this particular pattern? Three people I've known in Grad City have killed themselves in as many summers. I don't like this, not one little bit.) The most pressing issue about all this is that Maude's defense is in a week or so -- and what do you do when your advisor checks out right before your defense? I want to call the department and make sure that it's going to happen, to beg my advisor to please sit in (though Peppy Advisor is in a totally different field and is not Maude's fave person) or something! Not that she can't do it herself, of course, but. . .I just want to do something.

In other news, I'm starting to research vaccinations, because Absurdist Lover is adamantly against them; my view in the past has been that I would really rather not have my child contract polio, but now that I see the sheer volume of vaccinations we're talking about -- it's just alarming how many times medical science advocates poking a child. A vaccination for chicken pox? Uh, I had the chicken pox as a kid, and I don't think there's any reason to take a shot for it. Having chicken pox is uncomfortable but that's not a good enough reason to potentially mess with the development of a baby-child when I swear we really don't know enough about child development to really say whether all these vaccinations are completely safe. Flu shots? Easy. They don't work anyway. I'm pretty skeptical of what the medical establishment thinks it "knows" about childbirth and child development -- I believe it's perfectly possible that the mercury in these shots may cause autism in mercury-sensitive children and the medical establishment just hasn't caught on yet. (Though avoiding fish -- I just can't do that, can't condone that. We ADDers NEED our fish oil omegas!) After all, the medical establishment hasn't caught on to the idea that important hormonal bonding happens between mother and child in the first hours after childbirth (which is why rooming-in is important) or that epidurals and pitocin are bad for the mother and baby (oxygen-deprivation risk to baby, not being in touch with your body during, arguably, the most important physical experience of your life, drugs passing to the baby) or that sugar metabolism, g-i tract problems, and one's reproductive cycle are related. So I'm trying to do somewhat balanced research, distrusting the extremist alarmist views (as is my wont) and evaluating the science, while of course taking into account the views of the granola set with whom I often agree. Sigh. Parenting has more contested issues in it than anything I think I've ever been a part of. (Circumcision, schooling, diapers, vaccinations, staying at home versus working -- as if I have the choice -- gah and double gah!) Oy vey.

Today I only go to the office, thank goodness, though I'm having a good time teaching as well. And this weekend Absurdist Lover will be at a meeting on Saturday and then going to see his children on Sunday, so I will get some time to myself and obsess and worry focus on other things -- me things, like maybe the academy and writing. I am not going to obsess and worry about AL. I simply refuse. Maybe I'll continue reading Middlemarch (the authorial commentary and intrusion annoys me so it's been slow going) or maybe I'll watch all the movies that I don't watch when AL is here and work on this cross-stitch project. Or maybe I'll just play WoW. Let's face it -- I'll probably blog. Woohooo!
Posted by Earnest English at 12:54 PM

Vaccines - keep researching. There is so much mis-information out there, especially online. But there is a lot of good information too. I guess it's like everything else. The mercury preservative that people worry about is no longer present in vaccines and hasn't been for several years. Also, there are alternate schedules for vaccinations that don't involve so many at a time. I've heard people talk about a plan in The Vaccine Book by Dr. Sears that works that way. I, too, would be most worried about thinks like polio and measles. They really can be seriously debilitating diseases.

Your former professor's apparent suicide is tragic. I can only imagine that the lack of information makes it all the worse. Even if your adviser can't sit in on M's defense, maybe s/he can at least check to see that everything is being taken care of.