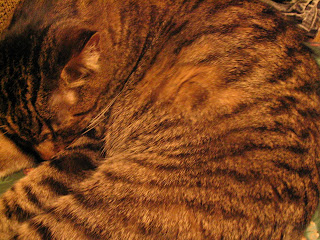 This is a picture of him when we lived in the camper. But in the last six weeks he developed mouth cancer -- first it was a hard little ball you could feel on the side of his jaw, then it grew awfully fast until he couldn't close his mouth. In addition to the medication he was on for his hyperthyroid, he was on three additional medications. He looked awful, he smelled awful, worst of all he clearly felt awful. There was nothing to be done to cure the mouth cancer. Yesterday, we decided it was time.

Fifteen years that cat and I were together. We lived together in eight different cities, even more apartments; we went overseas and back together. I picked him out of a litter at the pound. That was before I got married, before I finished college, before I got divorced and got two more degrees. He was there for all of it, purring in my lap. I've had Mr. Tabby so long I don't really know that I got him in 1994. It could've been 1993.

He used to be a great hunter, along with the cat who raised him, who died a couple years ago in Grad City, though with all the moves I eventually made them both indoor cats. He used to jump into people's laps. Even people who didn't like cats liked him.

I'm just sad over here. The rest of the family is merely okay: Absurdist Baby is as happy as ever and occasionally squabbly because of his two teeth, and Absurdist Lover's back has gone out.
Posted by Earnest English at 1:49 PM

i'm so sorry about mr. tabby. i know how hard it is to lose a pet. and he was loved and lived a long full life.

i will miss him. he gave me kisses once.

I'm terribly sorry - it's difficult to make those decisions and miss Mr. Tabby. Many comforting thoughts.

Poor Mr. Tabby, and poor EE. Blessings to you all.

I'm so, so sorry! My previous kitty lived to just short of her 19th birthday - I had her since I was 15. I know it's hard to take a kitty in for that last visit to the vet, but it was the right thing to do. Cancer is insidious.

I know you gave him a great home. Take care!

I'm so sorry to hear about Mr.Tabby. I know how hard it is to lose a pet who's been with you for so long.

I'm so sorry for your loss - I'm glad that he lived such a long, healthy life, though - full of love and comfort. And in the end, he didn't suffer, so that's a blessing. Hang in there and cuddle with that baby!

I'm sad too, in many ways he was a perfect cat. There's plenty of time to teach the baby to be gentle with animals.

Thank you all for your kind thoughts. I really appreciate it. The other day I thought I saw him in his usual spot out of the corner of my eye, but it was just my dumb sweater. At least he's not suffering anymore -- I know he was definitely not having a good time there at the end.

And Marcia, I'm sorry. I should've emailed you about him. I remember how you liked him.

(My verification word, before it figured out that I'm the owner of the blog, was "sublings," which seems just right for such a wonderful catfriend, a substitute sib, though he was also my substitute child too.)

How sad! Sending a big hug your way!

Oh, Earnest. So sorry to hear about Mr. Tabby! I know what you mean by "substitute child." He was a little cutie. I'm sending you good thoughts.