After Days of Medical Angst, Back to the Garden

So three weeks after the great Nasturtium Planting of 2015, here's what a piece of that bed looks like: 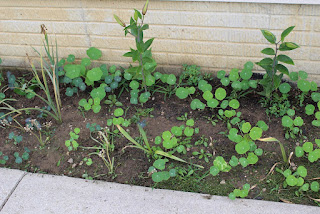 I really do love planting and tending the garden.  I was afraid I wouldn't -- that I would discover I only liked it because I thought I was supposed to like it somehow, or because I had read about it and thought I should but I really do love it.  Partly because beauty is just a balm.  Keats had that right -- "A thing of beauty is a joy forever."  I can just stand and stare at the nasturtiums or the pond or whatever and find myself more peaceful, more calm.  Partly because -- with the exception of this bed full of nasturtiums and spent bulbs and still readying-themselves-for-bloom lilies -- everything I plant is for eating, and I love food.

Though I woke up very late, I ended up doing lots of gardening work.  I planted my second 3 x 8 raised bed with three artichokes and as many onion seedlings as I could fit in staggering up and down (in a 3-2 pattern or a V) at 4 inch intervals).  (First I had to fill the bed with soil, mind you.)  It is really too late to be setting that stuff out, especially as they've been scrunched in near a grow light in the basement for months.  But today's when I could get everything in.  I also weeded the nasturtiums, though the weeds are getting really smart and growing right next to the nasturtiums.  I pulled two nasturtium seedlings up by mistake.  (I ate the leaves.)

I also harvested some shallots that had flopped over. 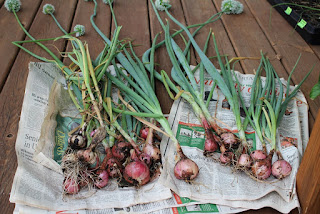 And I had to cut a few broccoli leaves because they were crowding out their neighbors.  I really don't know what I'm doing with broccoli, but this planting has turned into some kind of broccoli monster.  I tried to upload a picture of the broccoli monster, but it's on its side and I don't know how to get blogger to turn it over.  Grrr.  I also mulched the artichoke-and-onion bed and gave everything a long overdue dose of Neptune's Harvest.  Doesn't that sound like enough to count as a workout?

I've decided just this week to get back into exercising.  A big impetus for this is medical.  So I've been being checked out for X, which has many variations.  The variation I have is most likely is X-2 because I definitely have damage, but X-2 is really only diagnosable when they've totally ruled out X-1 by some tests that are really incredibly inconvenient and expensive -- in short, no one wants to do them.  So my doctor doesn't quite want to say I have X at all, because X-2 is a really weird variation where some of the things that seem to most characterize X are not there with X-2.  In any case, the treatment for X-2 doesn't make any sense as it's the same as X-1, which specifically addresses an aspect of X that X-2 doesn't have.   So my doctor has basically given me an X-1 treatment that makes no sense because my variable-that-in-others-is-high is already really low and there is no reason to further reduce it; I think it's just the difficulty of diagnosing me as positively X-2 and so the idea is why not consider treating it even though she can only say that maybe I have X. In any case, I also have another syndrome that is highly correlated with X-2.  There's very little to suggest that the medication that she's prescribed will address my X-2 at all, and there are side effects that I really don't like.  The doctor gave me three choices, 1) to medicate, 2) to be monitored closely, and 3) to get a second opinion.  A second opinion is astronomical in cost, when I truly believe I have X-2 because I also have another syndrome highly correlated with it along with my definite damage that they've found.  And what causes both?  A vascular disorder that I definitely have most likely caused by my terribly sedentary lifestyle.

So I've decided to whip myself back into shape and hopefully get rid of both the syndrome and the causes, in my case, of X.  And if this is not what is causing the X?  Well, it's not going to hurt anything for me to stop being some kind of couch potato.  And I'm going back to my doctor in a month so there's plenty of time to get on medication if I need to.  Oh, and of course there's also the possibility that the condition causing both syndromes is actually something else, something much worse.  MS, for example.  I don't care.  I'm not going to worry about it.  No matter what I have or don't have, I'm doing yoga and taking lots of supplements anyway.  Because I have a lot to do this summer, and anything I have or whatever is going to be helped by my exercising and getting thinner.  I'm done with all the medical panic I've had for the last few days, which totally stopped my great mojo where I was really getting things done each day.  Then I was just depressed and barely making it, barely even there.  Forget that.  I'm getting healthy and then we can talk about X and whether I'm really ill or whatever.  Yoga first.  Which is why I'm not going to count gardening as my workout and am going to go do some short form Ashtanga.  Now.
Posted by Earnest English at 10:34 PM

I'm sorry to hear about all of the X possibilities. But I agree -- no matter what is or isn't wrong, getting exercise and immersing yourself in beauty are definitely part of the cure! Take care of yourself.